Climate Heroes: How Rukim Makes Biochar into a Climate-Smart Business 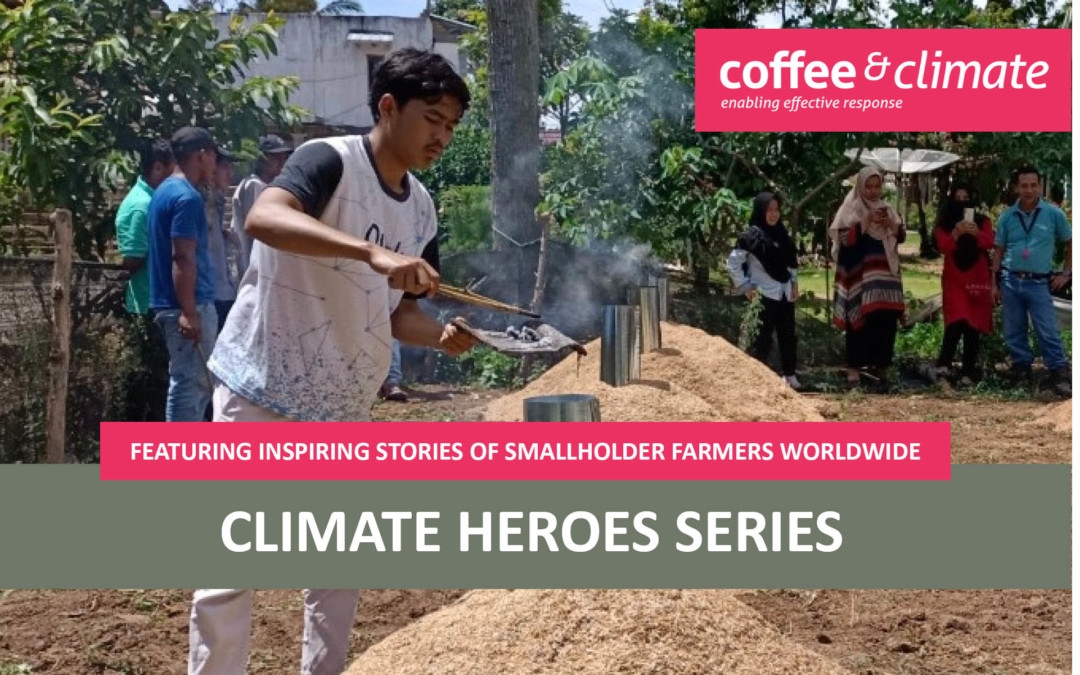 From Husk to Dust: Making Biochar into a Business

It all started with the love of motorbikes. A group of young men, all with modified old machines would come together to hang out, drive around the village paths, talk, and make plans for the evening.

Rukim, one of the oldest in the group, had been following climate change adaptation activities in OKU Selatan, Indonesia, part of the initiative for coffee&climate (c&c), for a few years, and practicing what he had learned on his own coffee farm. c&c, implemented by Hanns R. Neumann Stiftung (HRNS), is a pre-competitive partnership of leading coffee companies supporting smallholder farming families to become resilient to climate change.

After some time of enthusiastic learning, he became a c&c Field Assistant. He currently supports field trainings, assists smallholders to implement climate adaptation and mitigation practices on their farms answers their questions, and controls field manuals at the farm. Within his farmer group and his community, he is seen as a climate hero and innovator. Characterized by his unselfishness and willingness to help others, he is constantly passing on his knowledge and teaching others in his community about climate adaptation.

He also draws the attention of his young friends. Some days they would ride up to Rukim’s plot on their beaten motorcycles. The track, muddy and zigzagging through dense forest, was one of their favorite trails. It was always a race to see who would get there first. Excited by the fresh water in his plot and perfect places to rest, his friends never knew what they would find Rukim doing. He always had something new going on. 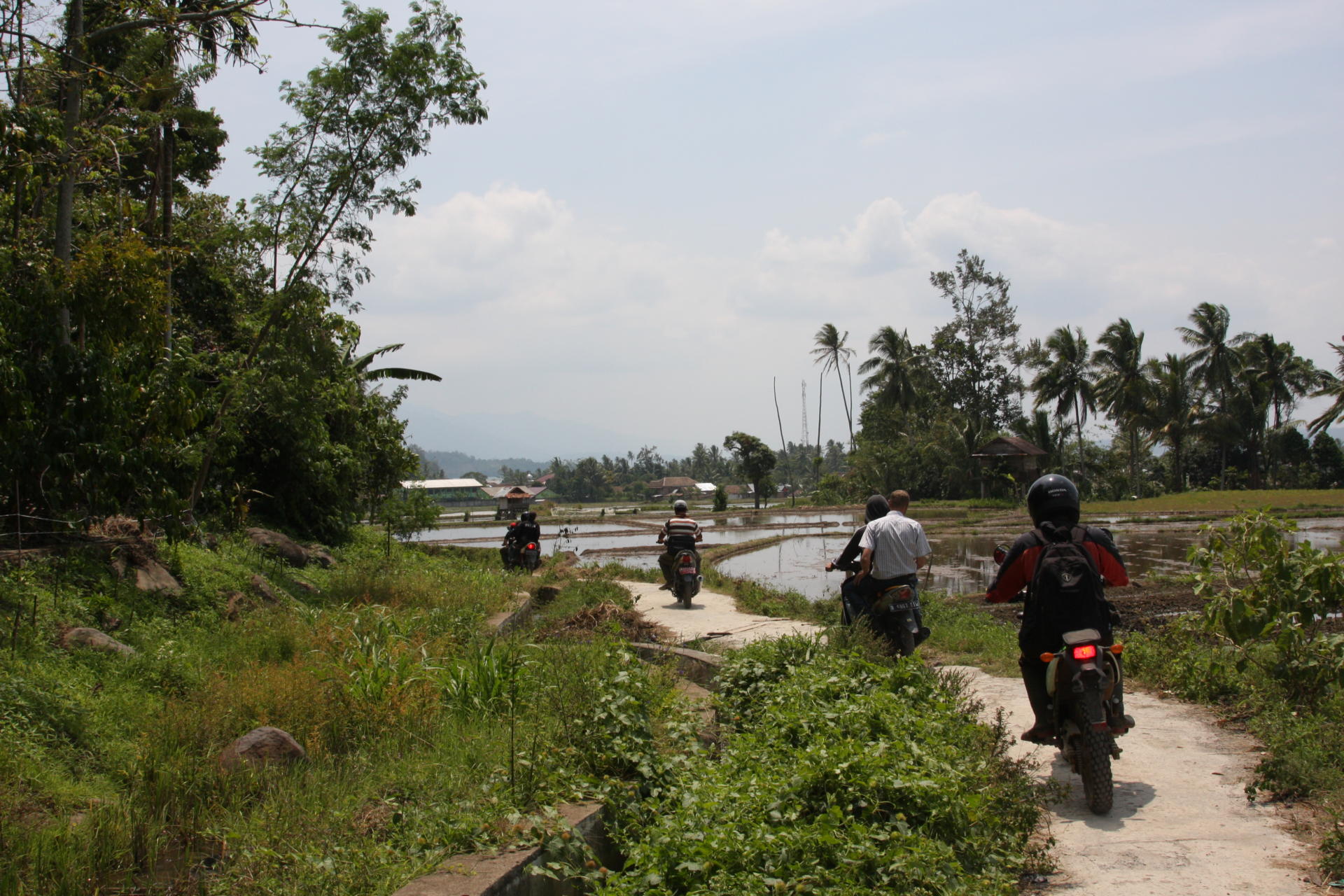 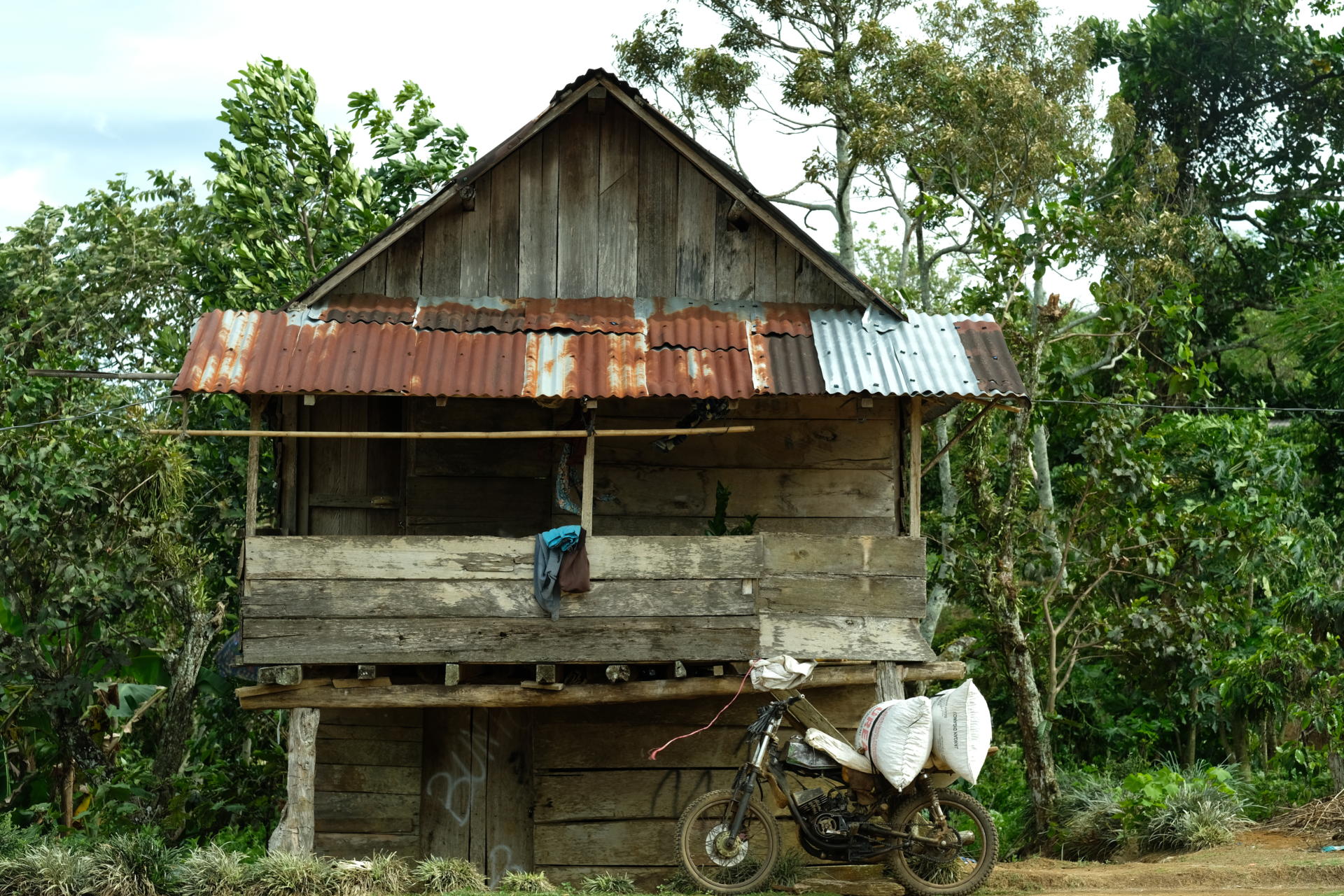 He was pruning his coffee in ways they had not seen before. He was experimenting with grafting of different coffee varieties and had a barrel full of sludge that, he said, was a magic growth formula. His coffee bushes looked much healthier than on other farms, and the avocado trees he was growing around the plot were growing rapidly.

As young farmers, most of Rukim’s friends also took care of coffee plots. Some had inherited land from their parents or worked the family farm. Others already had bought small plots or were leasing them from a larger farmer. Some shared farm lots and worked them together. Seeing what Rukim was doing, motivated them to learn and do more. However, coffee farming is tough in OKU Selatan. With fluctuating coffee prices and extreme changes in weather patterns, failures are no surprise. 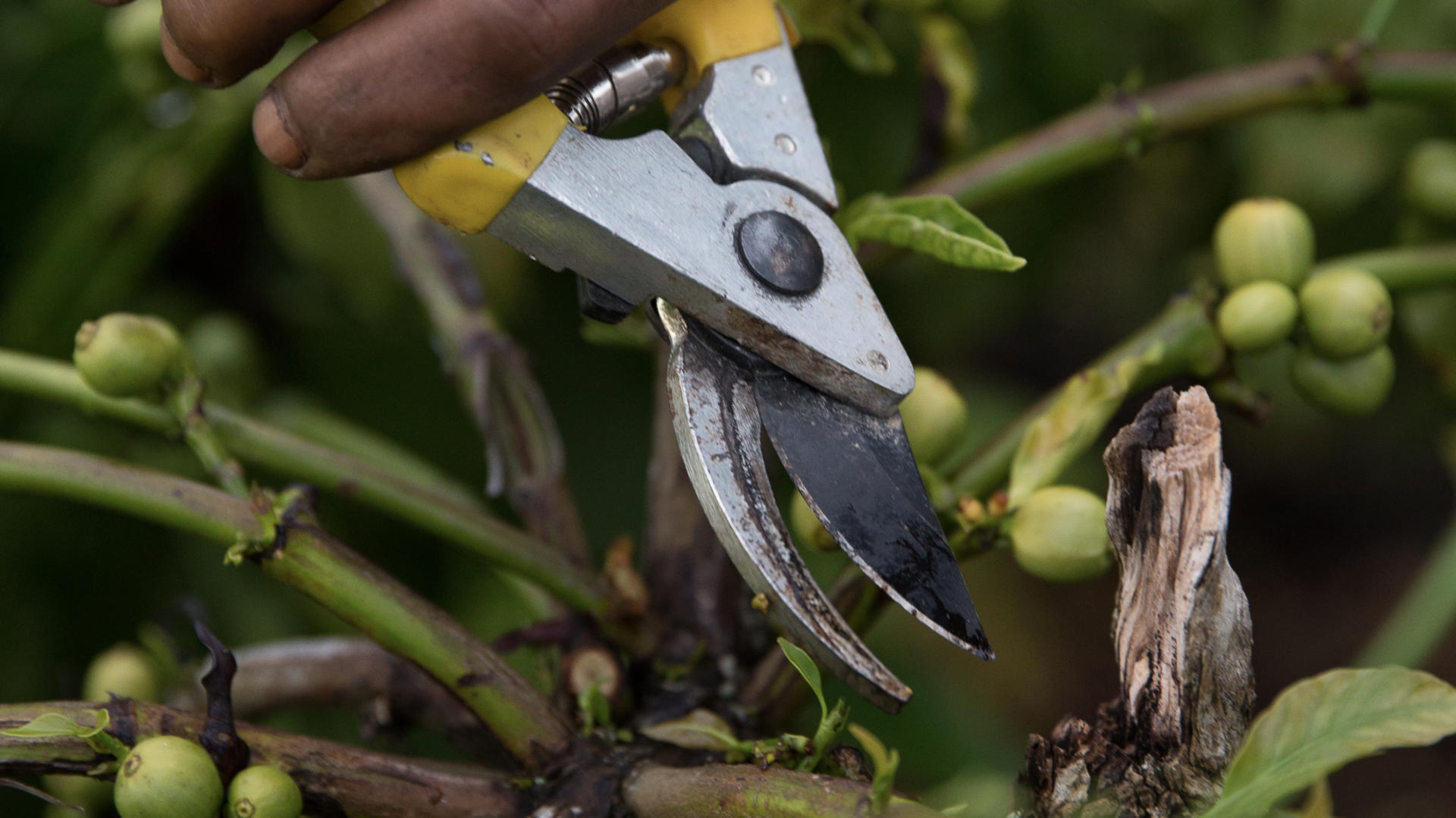 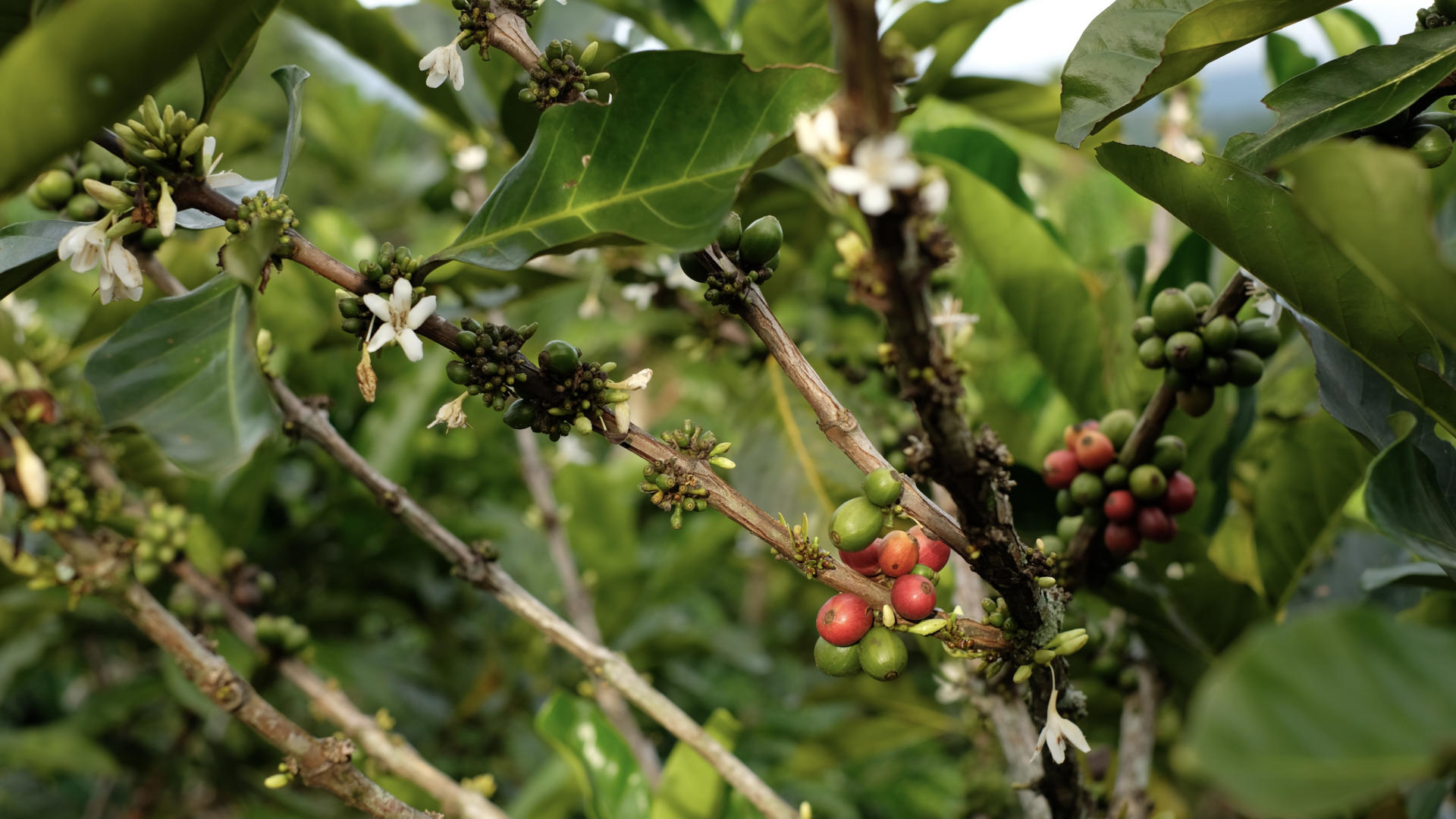 A year ago, Rukim’s neighbor, an agronomist also joined c&c as a field officer. They became good friends and constantly talked about possible innovations that could be introduced into the coffee sector and that were attractive enough for young farmers in coffee communities.

Together, Rukim and Waris took the initiative and formed a group of young farmers from the village of Sidodadi and named it Muda Jaya Sidodadi “Young Victorious Sidodadi”. 25 young farmers from the ages of 15 to 30 joined together to receive trainings, try out new initiatives and practice new ideas before sharing these ideas with other friends. They also exchanged ideas and started looking for business opportunities.

One of Rukim’s and Waris’ ideas was the production of biochar. Rukim had heard about the use of rice husk biochar and how it works well as a soil booster. He and Waris watched videos about the process of production and use of this husk charcoal. Knowing that rice husks were usually burned as a waste product and commonly available, they knew, that if they could make it work, they could produce this beneficial material at scale. It maybe could be made into a business.

After 3 trials on an ever-increasing scale, they showed it to the whole group and explained the benefits for the soil and how it can retain water and nutrients and significantly help production. The group banded together and collected a massive amount of rice husks from the local rice hullers, who were happy to get rid of the stuff.

With the larger trials successful, c&c is now programing further training to improve the final product, promote its use amongst farmers and help in marketing.  There are great examples of biochar being mixed with chicken and goat manure that easily compete with chemical fertilizer on both price and result. Although group members and direct family members use the dusty substance in their fields, for commercial use, better packaging is needed as well as an official analysis of the compounds. Pelletizing the material for easier handling is an option. It may need a small investment, but the returns are promising. 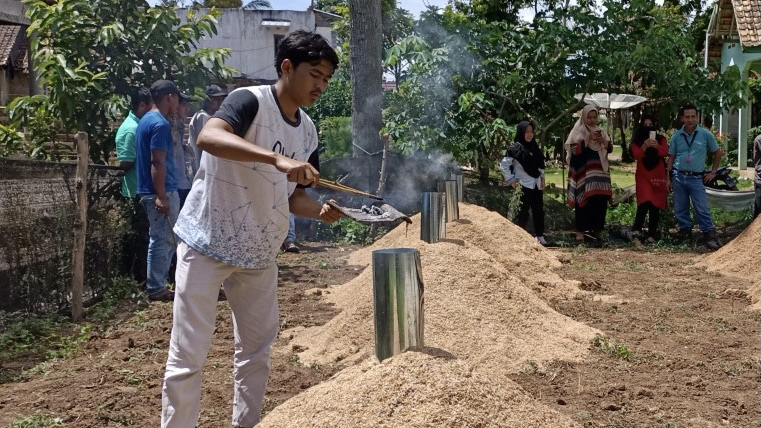 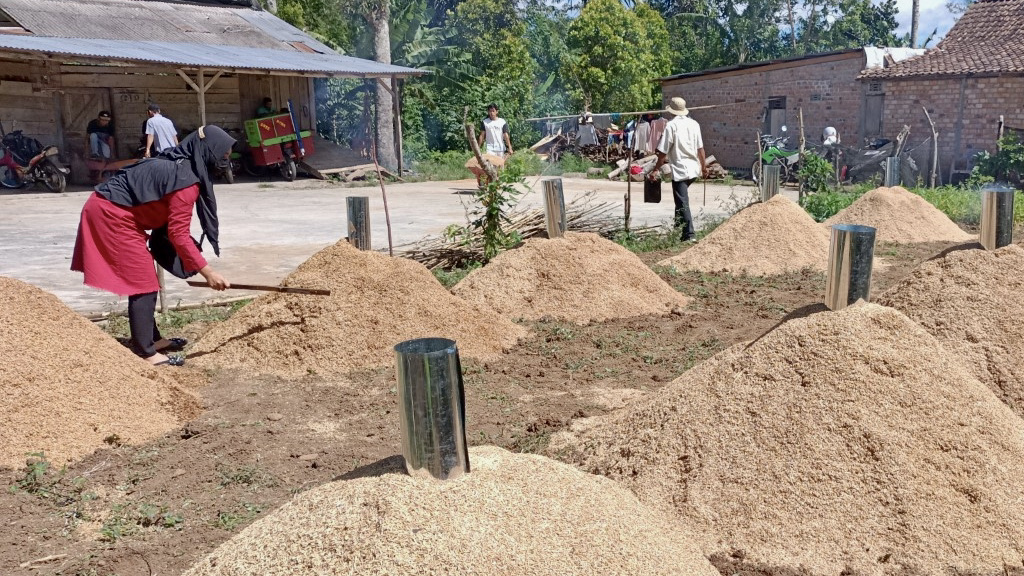 Yosef, Ariyansyah, one of the member groups still in Senior High School, really appreciates what he has learned. “This community is teaching me a good way to be a productive person, not just doing useless things,” says Yosef, proud of his group. “As a youth, what he earns from the farm is what we live from, and if we want some hobbies and enjoyment, we need to be innovative” and “If we work hard, we may be able to afford our own piece of farm one day. I declare myself to be a farmer, I have no regret for this, but we need to be smart.”

Indeed, there are other farmer groups who are now envious of the solid and active nature of this group and are approaching c&c  field staff for assistance in training in new techniques and business. For c&c, this is the attitude we are looking for, and have now hired a full-time expert to work directly with youth groups and coordinate with government agencies and private businesses to bring new opportunities to the village youth.

As the biochar production continues, even the rice hullers are starting to ask a few cents for their waste. But this does not deter Rukim, Waris, and Yosef in any way. “There is so much waste we can turn into a useful product; we will never run out” they declare. Every day after leaving the biochar site, Rukim and others tie a bag of dark powder onto their motorcycles to bring to their farms. As the engines roar through the broken mufflers, they speed off into the distance, leaving a dusty, profitable, and fertile trail behind. 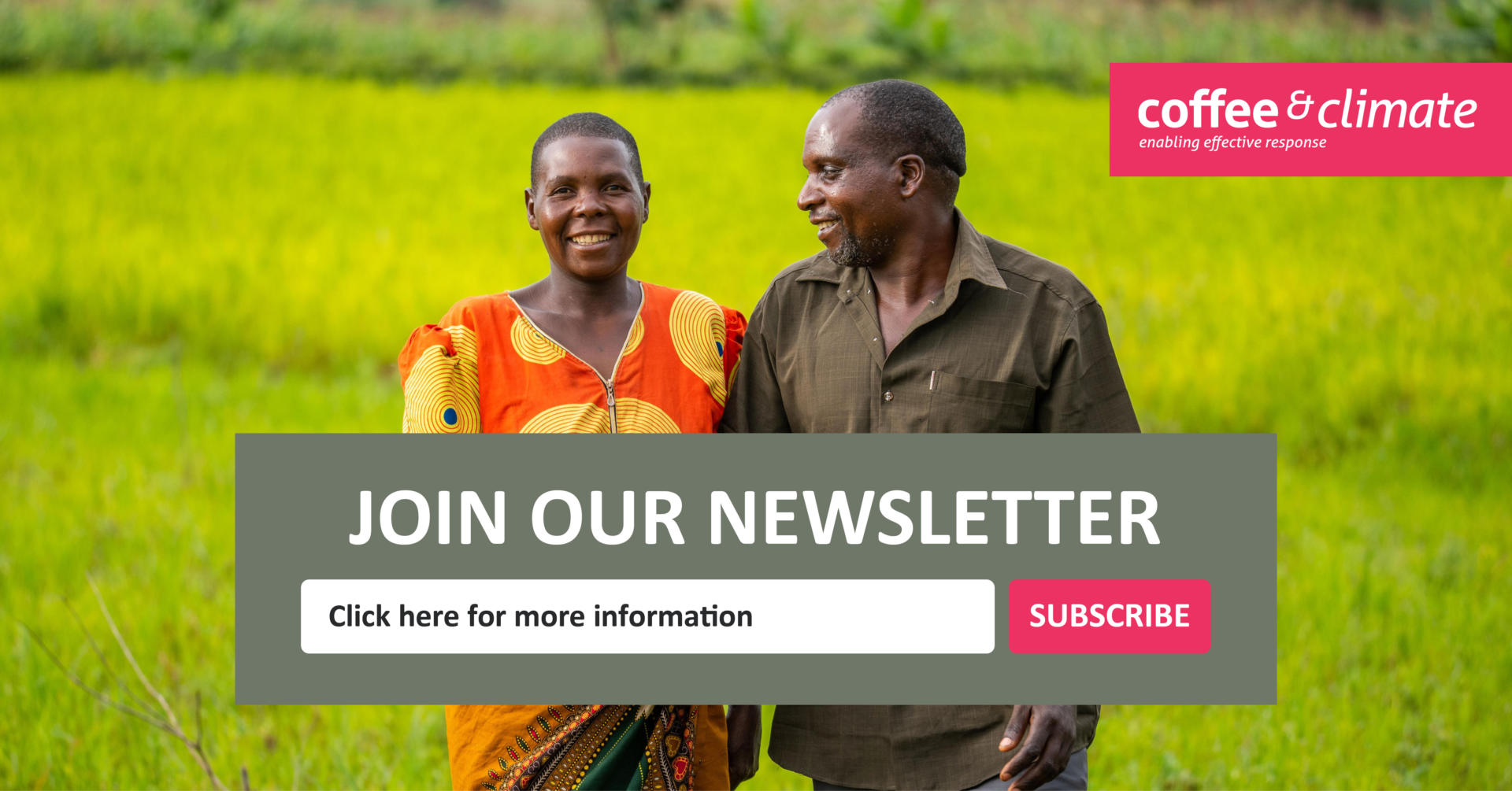