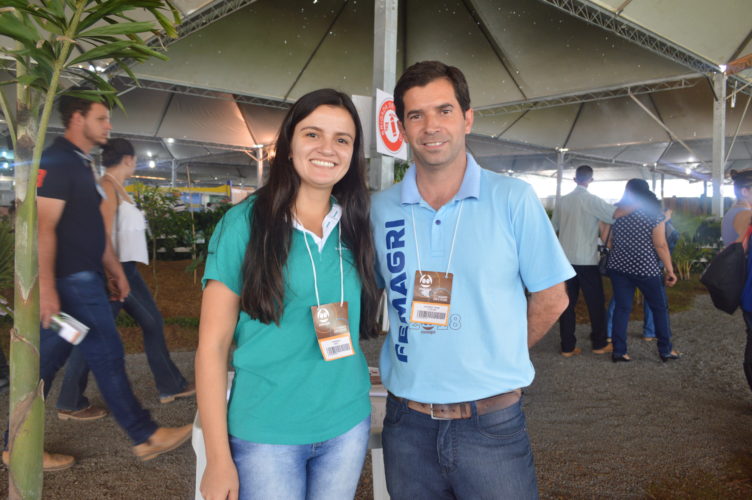 Eduardo René da Cruz, Technical Development Coordinator of COOXUPE, closely followed the presentations of the exhibitors on the topic of “Fazendinha”, at FEMAGRI, which is organized annually by COOXUPE in the city of Guaxupé in Minas Gerais. He stated, “This is a space to demonstrate how to implement good agricultural practices in the field. We need to take this opportunity to showcase these practices to the producer, the main player in the coffee production chain”. About COOXPUCE’s concern about climate change, Mr Cruz commented, “Only when good adaptation practices are used we get the results we expect to mitigate the effects of climate change on coffee.”

HRNS presented the use of seedlings in deeper polybags (one year seedlings) in coffee planting, the preparation of organic fertilizers (compost and bokashi) and the use of cover crops between coffee rows. These practices are oriented to increase the organic matter of the soil and its capacity of absorption and retention of humidity. Through these techniques the roots of coffee plants are able to capture water from deeper layers during drought events.

“The adoption of the seedling in deeper polybags is given as a very efficient practice since larger seedlings have a more developed root system, being tolerant to extreme climatic events, such as droughts that affect the coffee tree. In addition, it has a high survival rate in the field, reducing the need for replanting”, commented Fernanda Faria, c&c coordinator in Brazil.

Another practice that caught the attention of the approximately 1,500 visitors – who could count on detailed explanations inside the stand – was the septic tank built from drums and PVC connections. This technique aims to treat domestic sewage in a simple and economical way.

The septic tank is manufactured with tanks being an adaptation of the pit developed by the Empresa Brasileira de Pesquisa Agropecuária – Brazilian Agricultural Research Corporation, in a literal translation – (EMBRAPA). The technique is applied in the use of fresh bovine manure or another ruminant animal, where it occurs to the elimination of microbes and bacteria from human waste (bio digestion). It is resulting in a liquid natural fertilizer, without any unpleasant odor or worms that are harmful to human health. The simple technology replaces open sewage, “black” cesspits, avoiding the infiltration of feces and urine in the soil, which, in addition to contaminating well water, cause various diseases to the inhabitants of the rural area and can even cause death. In addition, this system can be used as an organic bio-fertilizer, contributing to soil quality, and also to rural production.

One of the new technologies promoted by c&c that was presented at FEMAGRI was the production of photovoltaic energy. Photovoltaic energy is used as a mitigation measurement to contribute to the reduction of emissions of greenhouse gases.

Climate change is happening, so it´s one of the upmost goals of the initiative for coffee&climate to identify practices that can support farmers to face and increase the resilience to the production systems, but also incorporate an approach of “mitigation”. This concept involves strategies that reduce the emissions of greenhouse gases and also capture carbon in the system. The photovoltaic energy is related to the use of clean energy and contributes to the reduction of gasses that increase climate change issues. c&c contacted providers of this service to promote the installation of generators on the farms. The idea is to not only used in rural houses, but also for work machineries, like dryers and cleaners with high efficiency. Farmers from cooperatives supported by HRNS and c&c started to utilize this technique and began to install generators. After a first evaluation and based on the outcomes of the first results c&c will scale the practice.

Bruno Fernandes, Environmental Engineer and Sanitary of Amvolt Sistemas Eléctricas e Solar Energia commented: “Photovoltaic energy is a common electric energy. The principle of the technology is the conversion of sunlight into electrical energy and this by the parameters of the planet leads us to consider being an inexhaustible and clean source of energy. So we just turn that light into energy to fuel the activities.” He also highlighted advantages such as reduction of pollution in the production of plates, greater potential for recycling compared to other sources of energy, noise elimination, and non-emission of air pollutants. “When we talk about the use of solar energy, the modules occupy reduced space to produce energy, having a reduced rate of deforestation.”

The high interest of the members of the cooperative COOXUPE ratified the importance of demonstrating adaptation practices as a contribution to the fair’s goal: “responsible production for a successful agriculture”.

We thank COOXUPE for the invitation and the support in the exhibitions and we look forward to participating in another edition in 2019. See you there!