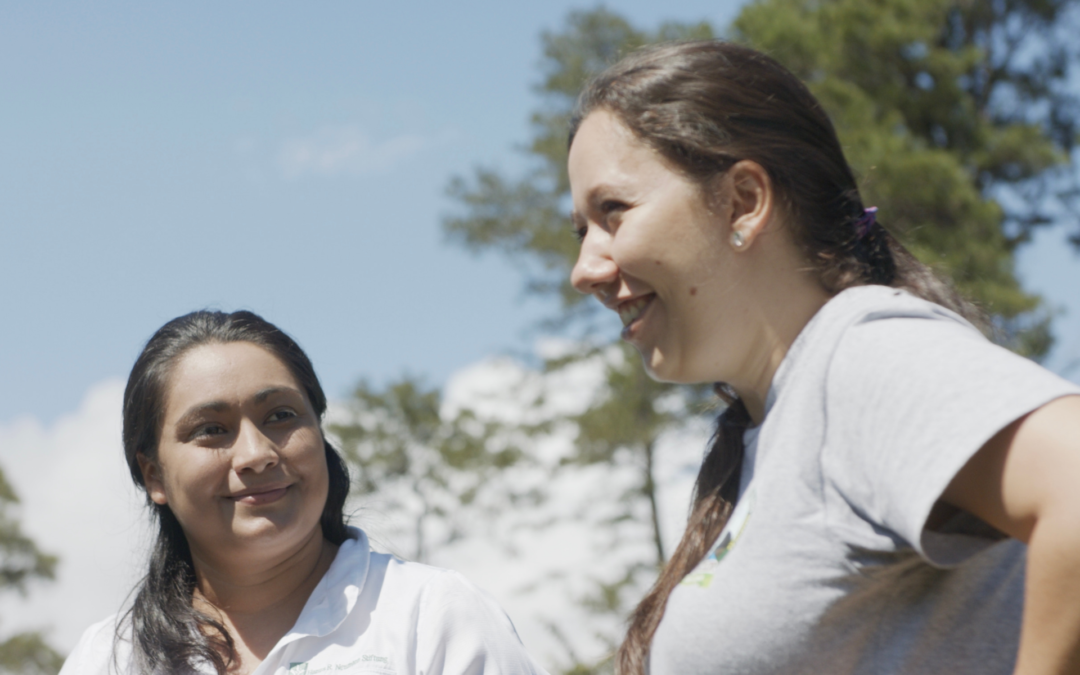 Dulce Posadas (27) is the daughter of a smallholder coffee farming family, who got involved in the local group of the initiative for coffee&climate (c&c) in Honduras, implemented by Hanns R. Neumann Stiftung (HRNS). With the help of the initiative, she learned how to adapt her family’s farm to climate change and thereby maintain coffee farming as a profitable business as well for her parents as for her generation. As a young woman working in the field, she is a good example of how c&c procures a better life for smallholder families, integrates younger generations, and promotes female empowerment. A virtual visit.

In August 2017, Dulce Posadas noticed the change of the coffee leaves for the first time. They had turned yellow all of a sudden and were stamped by little dots, instead of being lusty and of deep green, as before. Dulce remembers that she felt helpless. It seemed to be a disease, but it did not look at all as the woodlouse they had known before and knew how to handle. She turned to her father Wilfredo Posadas and asked for advice, but he did not know the answer either.

Wilfredo Posadas (58) has been a coffee farmer since 1989. Long before his daughter Dulce was born, he moved to the western region of Lempira, in Honduras, fell in love with coffee, bought a tiny parcel of land, and began to grow his own. What started off as a hobby became a lifelong dedication to coffee farming as a main occupation. But some years ago, everything he had learned, everything he had known, changed. After 30 years in the field, he noticed things, that had never occurred before. The seasons have changed and with it came a loss of crops.

“We didn’t know what was happening. Sometimes it was raining a lot when we did not expect it, sometimes we were looking into the sky, waiting, but the rain did not come.” – Wilfredo Posadas

Wilfredo Posadas is a humorous man; he laughs into the camera during the Skype call and jokes around. But when he talks about the rain, he furrows his brow. In the last five years, he says, the coffee plants often did not survive the heavy rains. The plants and roots were loaded with water and the crop perished. Some other times, when the rain happened to be missing, the coffee plants scorched on the field in the heat of the sun.

In the last couple of years, the blossoms came earlier and earlier, the flowers already cast out in March and April. The coffee plants also needed more and more fostering and nutrition over time, but still did not produce the same amount of coffee as before. Dulce holds her phone with a photo of 2019 into the camera. It shows a coffee plant with red and ripe fruits, beside one with fruits that remained green. “Due to the remarkable changes, the crops were little”, Dulce says.

Dulce engages in the initiative for coffee&climate (c&c)

In August 2018, Dulce accompanied her father to a meeting of the coffee farmer organization, where he is a member. While the assembly was talking about crops, the weather and the developments on the fields, Dulce was approached by Karina Orellana, an agronomist and local worker of HRNS. Working in the field in Honduras, it is her task to build up a local group of the initiative for coffee&climate (c&c) – implemented by HRNS – to unite women of the local community, empower them to take part in the production and commercialization of coffee, and to teach them in workshops techniques to produce climate resistant coffee and how to generate diverse sources of income from a coffee plant.

When reaching her, Karina is in a car, delivering avocado plants to farms around the neighborhood. She vividly talks about her mission as part of c&c.

“I come from a coffee farming family myself. But as women, we only help with the crops and prepare food for the workers, but we are often not involved in the growing process and do not get invited to the meetings with the traders. Only our fathers or husbands take part”, she says. “Our foundation wants to change that. Women also have a lot of potential!” Karina recalls that Dulce was very interested when she first told her about a women’s group to learn more about the production of coffee. She joined right away. 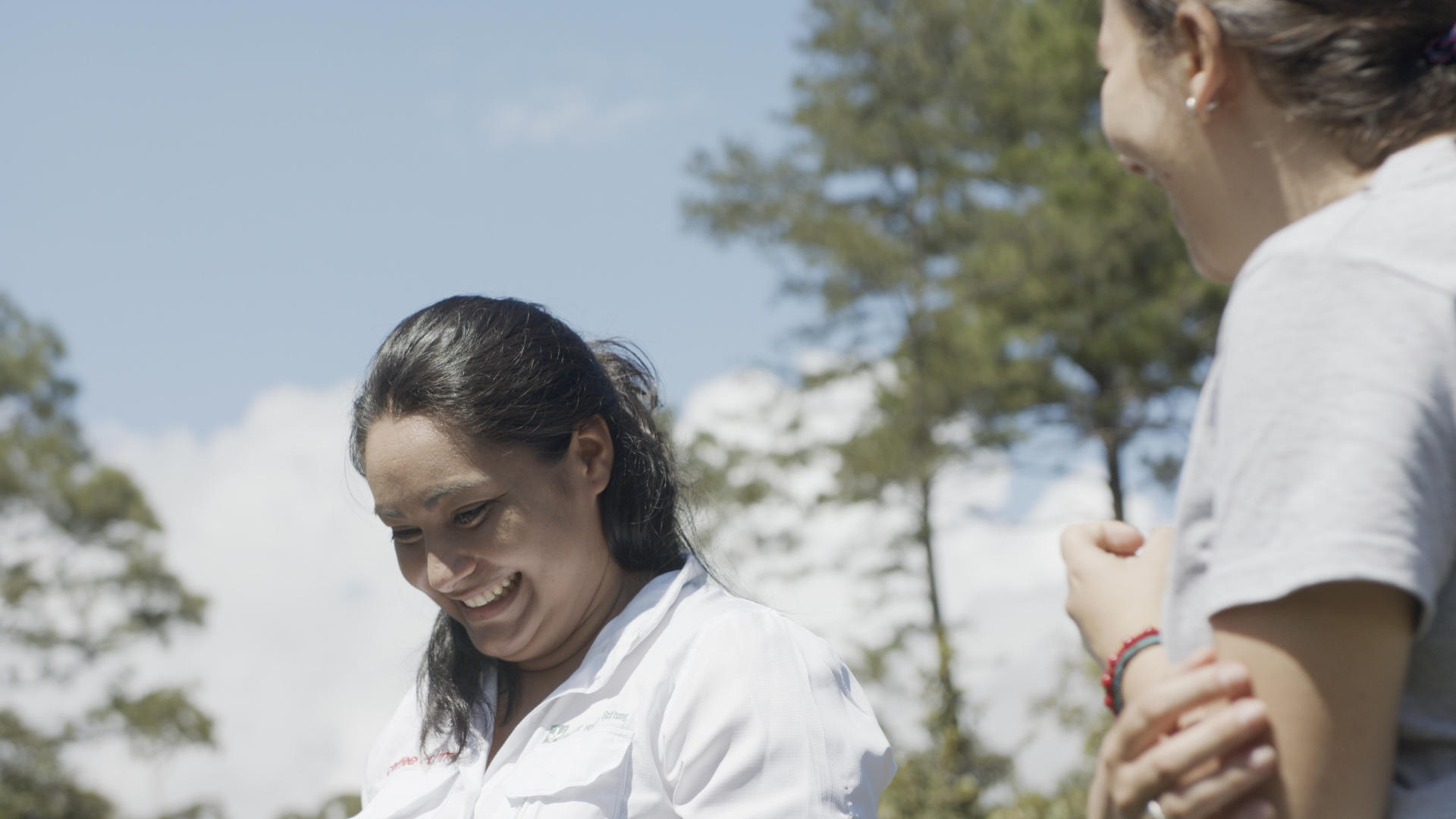 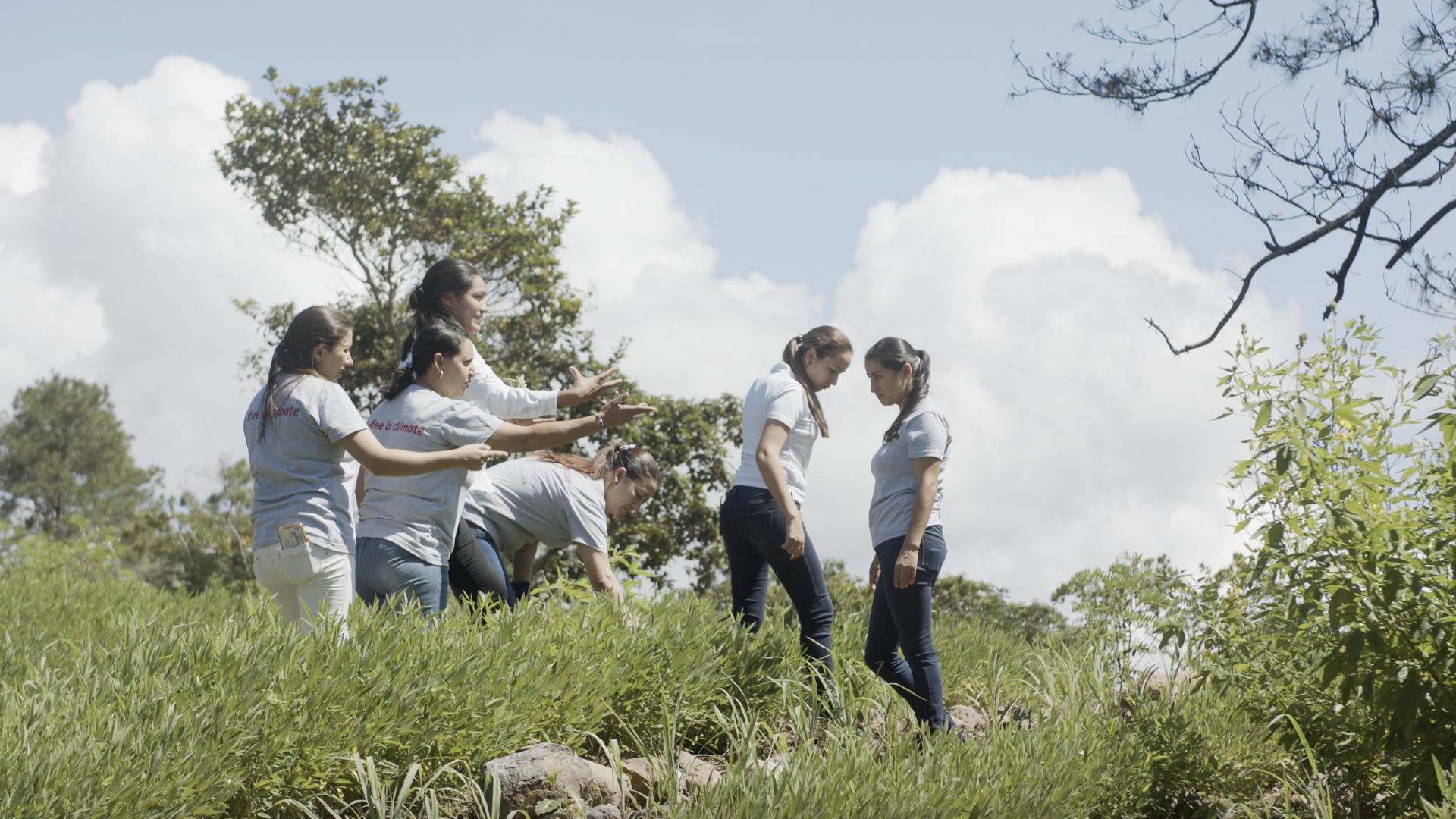 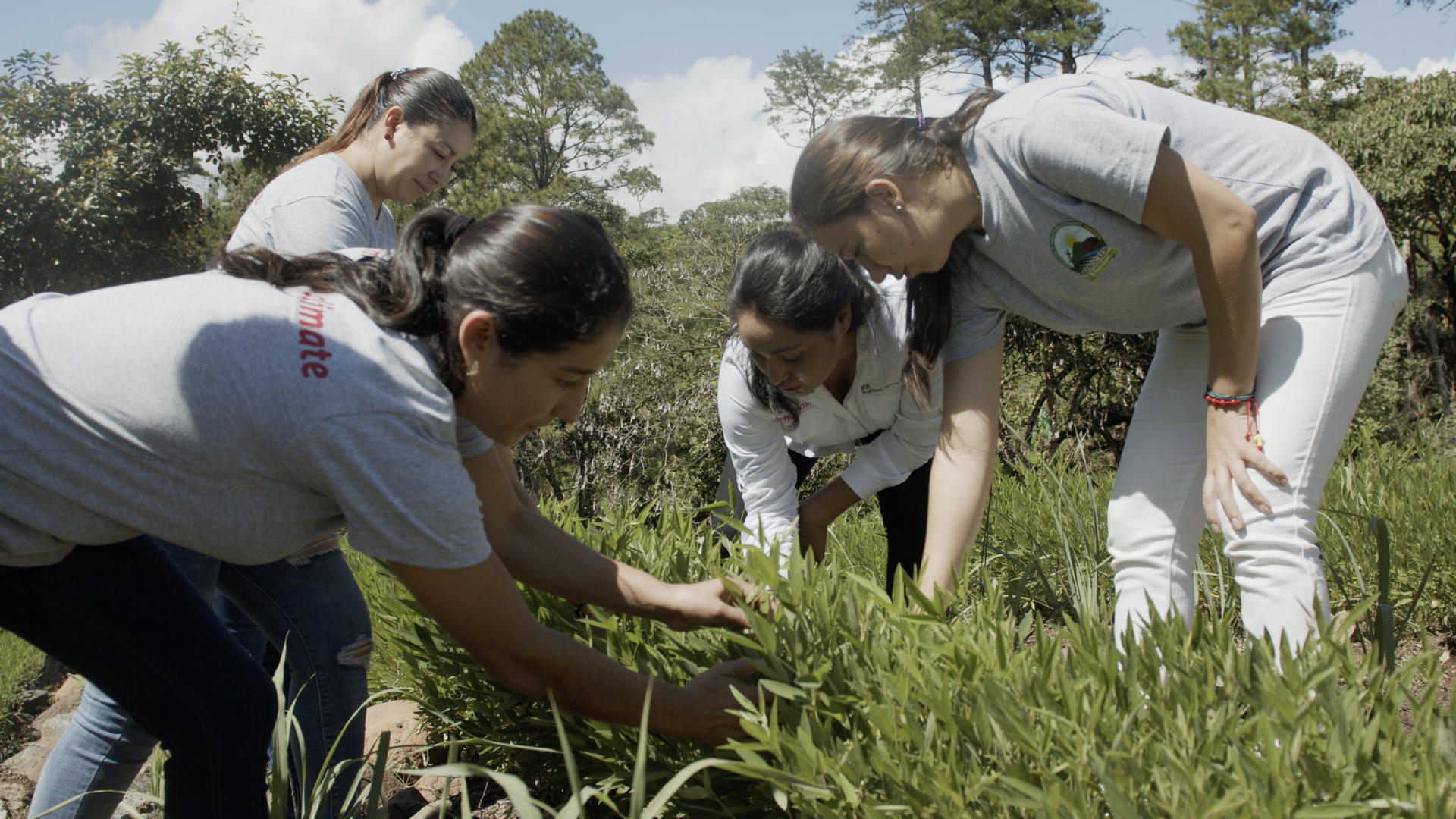 Dulce, together with Karina Orellana, and the c&c women’s group.

Together the women have learned which products they can gain from coffee plants other than the mere drink. “The production of coffee gets harder and harder”, Karina explains. “That’s why we want to show women and young people, that there are a lot of other products that can be produced from coffee fruits instead” In their group meetings, Dulce got taught how to manufacture soaps, wine and candles from coffee beans. But most importantly, Dulce, Karina and the other women talk about the effects of climate change on coffee. “In our workshops we show women how to cultivate coffee that is adapted to the effects of climate change, so that it remains profitable as a family business.”

During the workshop, Dulce started to understand what is happening at her father’s coffee farms. She learns why the crops are less fruitful, why the ground is either too dry or too damp. She also finds an answer to the question of why the leaves are covered with orange spots. She gets taught, that it is indeed a disease, a fungus called ‘coffee rust’. It has been spreading, fueled by extreme weather conditions, such as rising global temperature and heavy rainfalls. In short: its spreading is fueled by climate change.

Back home, she told her father about what she has learned and invited specialists of HRNS, skilled agronomists, that also work with c&c, to his farm to implement their measurements. It took her father a while to get used to the idea to rethink, Dulce recalls and smiles. “It was difficult for me at first”, Wilfredo Posadas admits. “When the specialist of HRNS first came, I felt like I was doing a bad job all the years before.”

A team of three agronomists are assigned to Dulce’s family: Karina, and two of her colleagues named Previn and Marvin. Every three months they are taking turns to visit the farm, stroll over the coffee fields together with the family to keep track of the process, deliver plants and seeds and discuss further measurements. They could not balance or prevent an early blossom, but they have shown Dulce and her family measurements to adapt to the conditions of climate change.

They advised Dulce and her father to lessen the number of coffee plants, to eventually increase the harvest. 30 instead of 50 plants each row, they recommend. “At first I didn’t believe it would work”, Wilfredo Posadas says, “it seemed more like a step back and all their advice were the contrary to what we were doing before. But it actually helped!” Dulce has learned, why. “When the plants are further apart, the diseases cannot overleap from one to the other.” 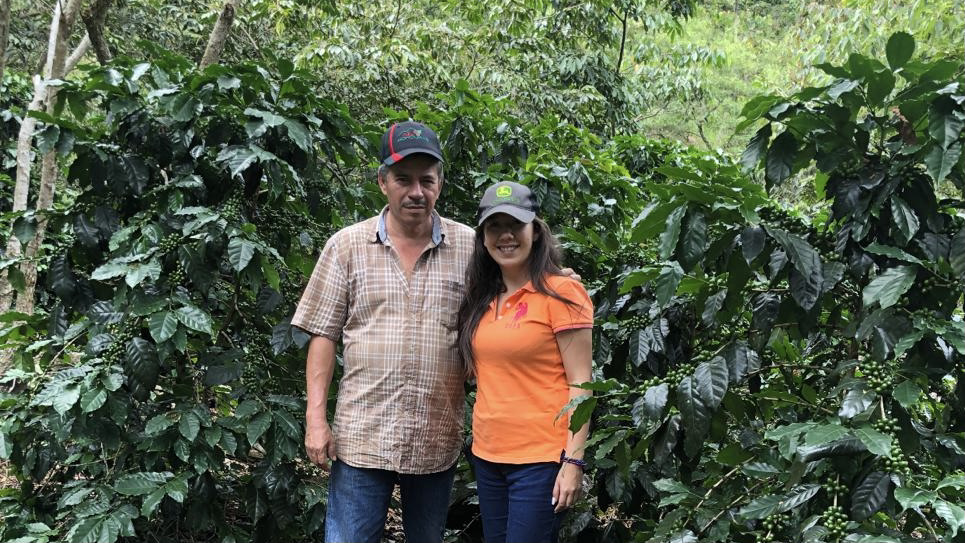 Wilfredo and Dulce in their family’s coffee farm. 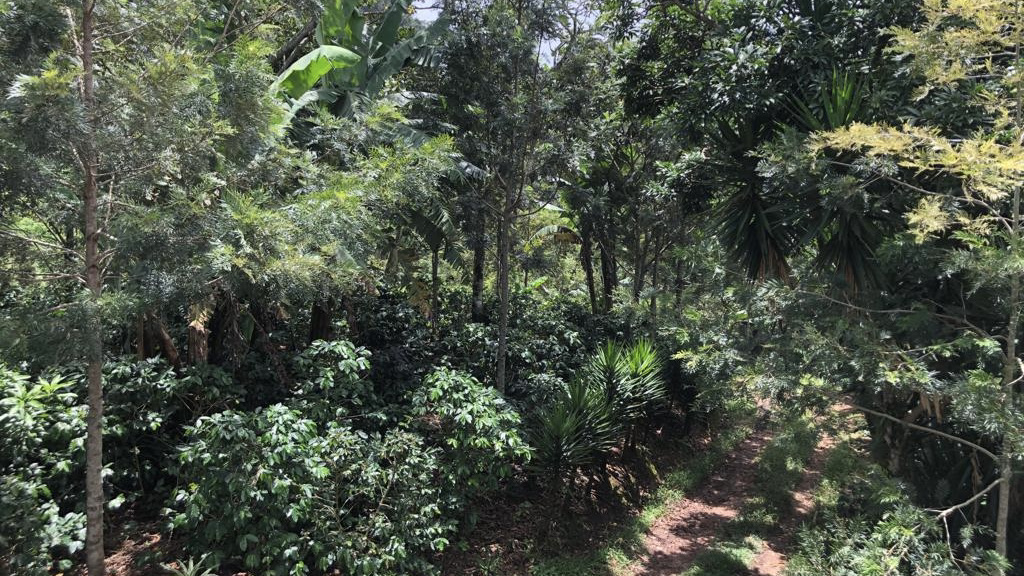 Together with their team of specialists, Dulce’s family has grown trees in the middle of the coffee rows as protection from extreme weather conditions that occur due to climate change: they protect the plants as well as the ground from plain heat and simultaneously prevent erosion of the earth when it’s raining heavily.

The specialist taught them about diversification to nourish the ground and generate a second source of income. Dulce and her family sow avocados and plant lemon trees, which they get from the organization. “The idea is to take advantage of our ground. We can use it not only to grow coffee but also to grow fruits”, Dulce explains.

Dulce as a role model

In Karina’s eyes, Dulce’s development is impressive and exemplary. “When I first met Dulce, she was shy and only came to the organization because of her father”, she says. Now, only three years later, she has become an idol for other women in the community and has shown that it is possible to leave the domestic tasks and to participate in coffee production as to build a business of one’s own.

Karina explains that Dulce and a female friend of hers started their own business recently. The two women have established a seed bank. Since a good way to protect the coffee plants from the effects of climate change is to cultivate mixed plants apart from just coffee, the demand of fast-growing other plants that serve diversification, donate shade, and prevent erosions has increased in the coffee farming community. But the single plants are rare, expensive to purchase and just a little amount of them is not enough to cover a whole farming ground. Therefore, Dulce and her friend bought some plants, grow and foster them, and then, when they carry seeds, cut, wash and finally sell them in little bags. For the coffee farmers in the region, it is cheaper to buy a big package of seeds than buying a single plant. 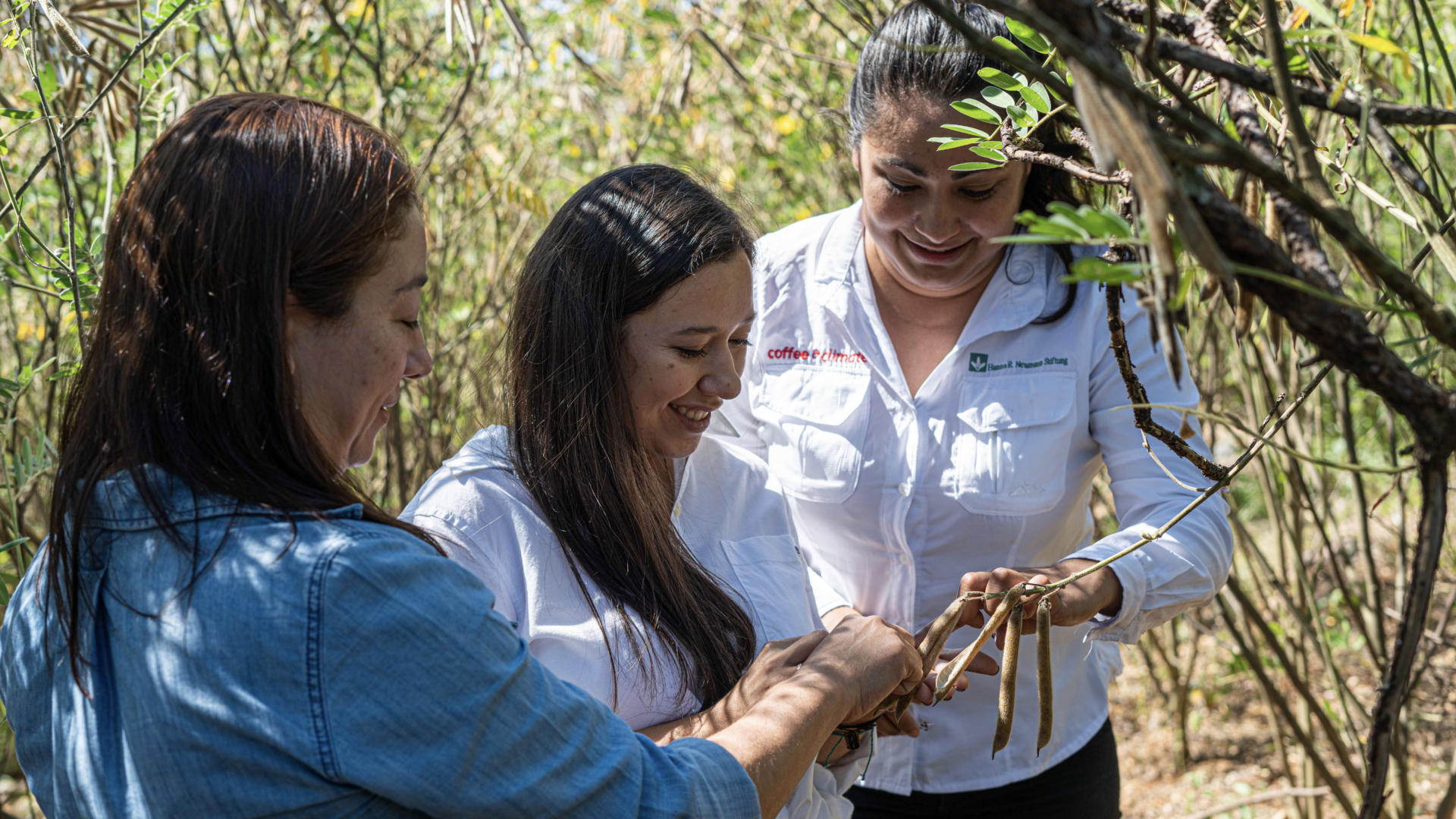 “I have seen Dulce’s development. She got so empowered by the c&c methodology and applied all the measurements at their family’s farm. Dulce even got elected as president of her coffee farmer organization – with only 26 years.”
Karina Orellana

Stay up to date with latest activities and news!